When the aborigines realised that the white men were not the spirits of their dead ancestors and that the settlers were taking more and more of their land and destroying the trees and wild life they began to fight back.

The aborigines killed a number of the settlers and even wounded Captain Phillip in an attack. The settlers reacted by slaughtering and poisoning the aborigines and systematically destroying the land and wild animals they lived on.

White settlers brought diseases the aborigines had never had before (diseases which were quite common in Europe at the time).

Aborigines caught smallpox and even the common cold and died in great numbers. Within two years smallpox had killed almost half the aborigine population around Sydney.

The British colonists declared that before their arrival all of the continent was terra nullius (uninhabited by humans). They used this as justification for taking whatever they wanted.

As more and more white settlers moved in and occupied the fertile lands the aborigines were pushed further and further away from their traditional lands and into the harsh arid interior. Their families were broken up, their children taken away from them and sent to be "civilised", their sacred sites destroyed and their wild animals hunted.

The killing and exploitation of aborigines by whites continued well into the twentieth century. The aboriginal population declined from the original 300,000 when the first white settlers arrived to only about 60,000 people (less than the number of people that can be seated at the MCG stadium!).

Aborigines were second class citizens in their own land. They only got the right to vote in 1967.

This is a shameful part of Australian history.

Much progress has been made over recent years to try to right the wrongs of the past. Where possible the government has been returning land to their traditional owners and encouraging Aborigines to rebuild their culture and lives.

They are the single most disadvantaged group of people in Australia.

There is still a long way to go!

Up to about 250 millions of years ago the world had just one huge super-continent call Pangaea. Animals and plants were able to move and intermix with one another.

About 200 million years ago this super-continent broke up into two continents (Laurasia and Gondwana).

About 60 million years ago Gondwana broke up into what was to later become South America, Africa, Antarctica, India and Australia.

Since then Australia has been isolated from the rest of the world by vast oceans. The animals and plants which were originally here no longer had contact with animals from other parts of the world. They evolved separately. That is why they are so different.

In about 200AD a famous Greek astronomer named Claudius Ptolemy believed that the earth had to be balanced or it would topple over. So he figured that there had be a land yet unknown to Europeans somewhere below the Indian Ocean. Over time this yet to be discovered land came to be known as 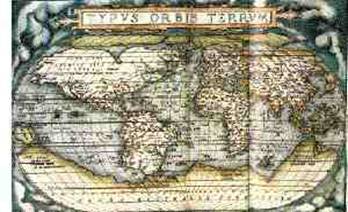 For many centuries people in Europe were certain that there was a land down under (this map from 1570 shows what they thought) but nobody knew how to get to it . They kept missing it or not realising that they had stumbled upon it. For over 200 years hundreds of European navigators set across the seas searching for the Unknown

They expected to find gold and other treasures.