Sport in the UK

Many team sports in Britain, but especially football, tend to be men-only, 'tribal' affairs. In the USA, the whole family goes to watch the baseball. Similarly, the whole family goes along to cheer the Irish national football team. But in Britain, only a handful of children or women go to football matches. Perhaps this is why active support for local teams has had a tendency to become violent. During the 1970s and 1980s football hooliganism was a major problem in England. In the 1990s, however, it seemed to be on the decline. English fans visiting Europe are now no worse in their behavior than the fans of many other countries.

For the great mass of the British public the eight months of the football season are more important than the four months of cricket. There are plenty of amateur association football (or 'soccer') clubs, and professional football is big business. The annual Cup Final match, between the two teams which have defeated their opponents in each round of a knock-out contest, dominates the scene; the regular 'league' games, organised in four divisions, provide the main entertainment through the season and the basis for the vast system of betting on the football pools. Many of the graffiti on public walls are aggressive statements of support for football teams, and the hooliganism of some British supporters has become notorious outside as well as inside Britain.

Football has been called the most popular game in the world, and it certainly has a great many fans in Britain. And now I want to mention the English terminology for football.

Association football (or soccer) is the game that is played in nearly all countries. A team is composed of a goalkeeper, two backs, three half-backs and five forwards.

Association football remains one of the most popular games played in the British Isles. Every Saturday from late August un­til the beginning of May, large crowds of people support their sides in football grounds up and down the country, while an almost equally large number of people play the game in clubs teams of every imagin­able variety and level of skill. Over the last 20 years though, the attend­ance at football matches has fallen away sharply. This is because of changing lifestyles and football hooligans about I have already written but I want to add that violence at and near the football grounds increased, there was an ever-increasing tendency for people to stay away, leaving the grounds to football fans.

After serious disturbances involving English supporters at the Eu­ropean Cup Finals in Brussels in 1985 which led to the deaths of 38 spectators, English clubs were withdrawn from European competitions for the 1985-1986 season by the Football Association. The Cup Final at Wembley remains, though, an event of national importance. Here is a drawing of a foot­ball field, or "pitch", as it is usually called. 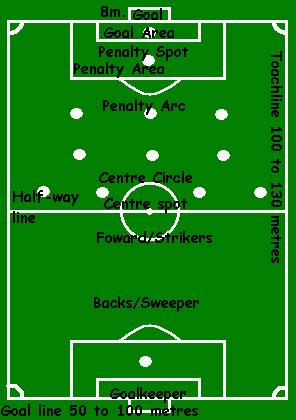 The football pitch should be between 100 and 130 metres long and between 50 and 100 metres wide. It is divided into two halves by the halfway line. The sides of the field are called the touch-lines and the ends are called the goal-lines. In the middle of the field there is a centre circle and there is a goal at each end. Each goal is 8 metres wide and be­tween 21/2 and 3 metres high. In front of each goal is the goal area and the penalty area. There is a penalty spot inside the penalty area and a penalty arc outside it. A game of football usually lasts for one and a half hours. At half-time, the teams change ends. The referee controls the game. The aim of each team is obviously to score as many goals as possible. If both teams score the same number of goals, or if neither team scores any goals at all, the result is a draw.