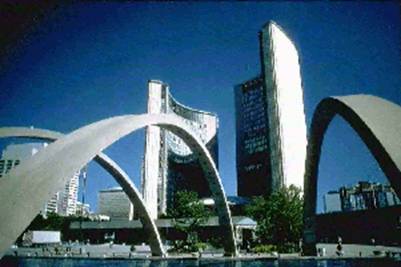 The two towers, rising 20 and 27 stories, are located in the city center in Nathan Phillips Square. A reflecting pool under the arches is used as an ice-skating rink in the winter.

Toronto is the center of most populous area in Canada and the capital of province of Ontario. Toronto is located on the north shore of Lake Ontario in Canada. The region is known as the «Golden Horseshoe» and is rich in agriculture and industry. It is well placed to trade with all of Canada, the United States, and the world.

Known in the past by such names as «Little York», «Hogtown», and «The City You Love to Hate», Toronto has been portrayed in more flattering terms. The National Geographic declared Toronto «worldly, wealthy, personable, and relatively problem free». Art Gallery called the city «possibly the most civilized metropolis in the Western Hemisphere».

Shoppers can browse through shops on Queen Street West, admire the best of designer fashions in the renovated district of Yorkville, or visit Eaton Center, a four - level $25-millions retail complex. For people ­watching and plenty of culinary delights, there's Kensington Market, which features fresh produce, fish, and plenty of friendly conversation.

The city was designed and renovated to make the most of its settings on the store of Lake Ontario. The best view is from the CN Tower, a 553-metre spire that is considered the world's tallest free-standing structure. Much of the appeal of Toronto lies in its sense of history, which dates back to 1749 when French fur traders established a ford on the site.

Toronto boats a vast multicultural mix, with large groups of Italians, Germans, Portuguese, Ukrainians, Asians, and West Indians. Toronto is a cultural center, with the ultra - modern O'Keefe Center, which is home to the Canadian Opera Company and the National Ballet of Canada; the Art Gallery of Ontario, with more than 15,000 works - from Old Masters to contemporary art - in its permanent collection; and the Royal Ontario Museum with its vast array of art and artifacts from cultures the world over. Business and finance are another important element of the city, and Toronto's skyline is dominated by the high - rise towers of financial institutions. Among the most famous is the Royal Bank Tower with gold-embedded window panels.

You can see the CN Tower on the first page of the paper.

At 553.33 meters the CN Tower is considered the world's tallest free-standing structure. Construction took 40 months, cost $57 millions, employed 1573 workers, and was completed in June 1976. A slender column resembling a giant needle, it weight 132080 metric tons - the equivalent of 23214 large elephants.

Visitors can step inside one of four glass-faced elevators and be whisked to the Skypod Observation level in under a minute. There are three observation decks, at 342, 346, and 447 meters aboveground, the world's highest public observation gallery. Each of these offers panoramic views of Toronto, the Toronto Islands, and, on a clear day, Niagara Falls. Spectacular views are also to be had from Top Of Toronto, a restaurant at the 350-metre level that makes a full revolution once every 72 minutes. Those who prefer to dine on the ground level can enjoy a snack in the family - style restaurant.

The CN Tower has the longest metal staircase in the world ( 2570 steps), which is made available to the public each year for a charity stair climb. Dar Robinson has jumped from the top of the tower twice - once with a parachute for the filming of the movie “Highpoint”(1979) and once using a wire cable for the TV show "That's Incredible". On the tower's tenth anniversary, "Spider Man" Goodwin completed two free - style climbs outside the glass elevator-shaft window.

Sky Dome is the world's greatest entertainment center. It's a host to wide variety of sporting spectaculars, concerts, family shows and consumers shows.

How big is Toronto's Sky Dome? Well, you could put eight Boeing 747s on the playing field. Or all of Eaton Center. Or a 32-home subdivision. Or the Roman Coliseum. Even with the retractable roof closed, a 31-storey buildings could fit inside the structure.

The $500-millions buildings opened on June 3, 1989, after 32 months of construction. On that day, inclement weather forced the developers to prove that the paneled roof could be closed in 20 minutes. The roof runs on a series of steel track and bogies, weighs 11000 tons and is made up of steel tresses covered by steel cladding.