The Land And Resources

Scotland, administrative division of the kingdom of Great Britain, occupying the northern third of the island of Great Britain. Scotland is bounded on the north by the Atlantic Ocean; on the east by the North Sea; on the southeast by England; on the south by Solway Firth, which partly separates it from England, and by the Irish Sea; and on the west by North Channel, which separates it from Ireland, and by the Atlantic Ocean. As a geopolitical entity Scotland includes 186 nearby islands, a majority of which are contained in three groups—namely, the Hebrides, also known as the Western Islands, situated off the western coast; the Orkney Islands, situated off the northeastern coast; and the Shetland Islands, situated northeast of the Orkney Islands. The largest of the other islands is the Island of Arran. The area, including the islands, is 78,772 sq km (30,414 sq mi). Edinburgh (population, 1991, 421,213) is the capital of Scotland as well as a major industrial area and seaport. 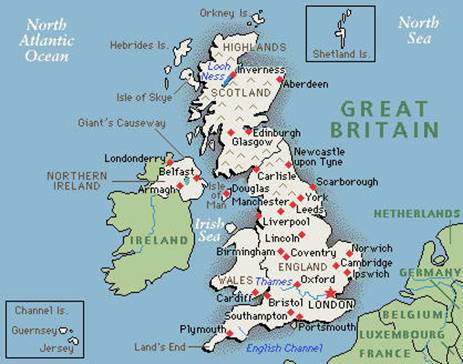 The Land and Resources

Scotland has a very irregular coastline. The western coast in particular is deeply penetrated by numerous arms of the sea, most of which are narrow submerged valleys, known locally as sea lochs, and by a number of broad indentations, generally called firths. The principal firths are the Firth of Lorne, the Firth of Clyde, and Solway Firth. The major indentations on the eastern coast are Dornoch Firth, Moray Firth, the Firth of Tay, and the Firth of Forth. Measured around the various firths and lochs, the coastline of Scotland is about 3700 km (about 2300 mi) long.

The terrain of Scotland is predominantly mountainous but may be divided into three distinct regions, from north to south: the Highlands, the Central Lowlands, and the Southern Uplands. More than one-half of the surfaces of Scotland are occupied by the Highlands, the most rugged region on the island of Great Britain. Consisting of parallel mountain chains with a general northeastern-southwestern trend and broken by deep ravines and valleys, the Highlands are noted for their scenic grandeur. Precipitous cliffs, moorland plateaus, mountain lakes, sea lochs, swift-flowing streams, and dense thickets are common to the Highlands, the most sparsely inhabited section of Scotland. The region is divided in two by a depression, known as the Glen More, or Great Glen, which extends from Moray Firth to Loch Linnhe. To the northwest of this lie heavily eroded peaks with fairly uniform elevations ranging from 610 to 915 m (about 2000 to 3000 ft). In the Highlands southeast of the Great Glen the topography is highly diversified. This region is traversed by the Grampian Mountains, the principal mountain system of Scotland. The highest peak of the Grampians is Ben Nevis (1343 m/4406 ft), the highest summit in Great Britain. To the south of the Highlands lies the Central Lowlands, a narrow belt comprising only about one-tenth of the area of Scotland, but containing the majority of the country's population. The Central Lowlands are traversed by several chains of hills, including the Ochil and Sidlaw hills, and by several important rivers, notably the Clyde, Forth, and Tay. The terrain of the Southern Uplands, a region much less elevated and rugged than the Highlands, consists largely of a moorland plateau traversed by rolling valleys and broken by mountainous outcroppings. Only a few summits in the Southern Uplands exceed 762 m (2500 ft) in elevation, the highest being Merrick (843 m/2765 ft) in the southwest. Adjoining the Southern Uplands region along the boundary with England are the Cheviot Hills.