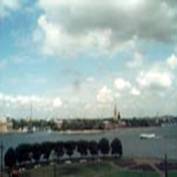 Historical valuable materials and shipbuilding information were preserved in the Model Chamber. Its building was rather small for such a big collection and in 1805 a Maritime Museum was founded. Some years later engravings and pictures on marine themes in addition to draughts and ships models appeared in the Museum. But in spite of this in 1827 the Museum was closed because of the lack of room. And only in 1867 the Russian government opened the Museum again, yielded to public opinion and efforts of naval officers. Its collection was enriched by many valuable objects. Among them were personal things of emperor Peter I, the founder of Russian Navy, famous admirals and officers; paintings and engravings, specimens of cold steel and fire-arms. The main collection of warships and transport ships models was increased too. The restored Maritime Museum was located in the west wing of the Admiralty building. It was very popular among visitors. In 1909 it was renamed as Emperor Peter the Great's Maritime Museum. 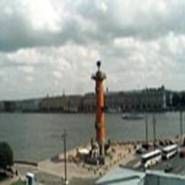 The Revolution of 1917 and the Civil war in Russia 1918 - 1920 have brought essential correctives the Museum's exhibition. The main goal for it became to demonstrate the leading role of the Communist Party in restoration and development of the Navy. The collection enriched with materials concerning the work of seamen-communists, Fleet's Party and Comsomol organizations. The Museum has received items from the museums, closed to that time, for example, museums of Guards Naval Depot and Naval Cadet Corps. The subjects of a naval life, paintings wellknown marine painters as I. K. Aivazovskiy and A. N. Bogoliuboff, naval uniform, Russian awards and marks were obtained on auctions and the private persons. But at the same time, in 1920-30th the large number of subjects of the Romanov emperor's family, nobiliary surnames were annihilated in the Museum under the pressure of new circumstances. This loss has become irreplaceable. And only due to the true devotees of Museum it became possible to preserve the less, that makes the pride of its collection today.

In 1939-1940 the Museum was renamed as the Central Naval Museum and was transferred from its historical place - Admiralty - to a building of former Stock exchange at the spite of the Vasilyevskiy island. This building was constructed in 1805-1810 under the project of a known architect Jean Francoise Toma de Tomon. Since that times the Central Naval Museum has become one of the most

favourite and attended museums of the city.

During the World War II a part of the collection was evacuated to Ulyanovsk city. But a number of the employees had being worked in blocaded Leningrad, collecting the unique materials concerning the defenders of Leningrad. Excursion&lecturer work was going on the ships and in units of Red Banner Baltic Fleet, at the enterprises and in hospitals of the besieged city The mobile exhibitions worked.

The post-war period is characterized by active museum exhibition activity. The employees of the Museum repeatedly left with mobile exhibitions on all Fleets, carrying out large educational&cultural activity. In the beginning of 50-th the professional Studio of marine artists was created under the decision of the Navy's Govering body and initiative of the Museums' employees. It aimed to update the Museum's collection by a materials illuminating those pages of a history, which have not found sufficient representation in an exhibition. Today the talented artists are working in Studio, among them the Deserved artist of Russian Federation V. A. Pechatin, Z. G. Abashvili, M. A. Kuznetsov, S. V. Pen, V. P. Yarkin and others. The scientific employees of the Museum work under the creation of the new museum catalogues. That has allowed to include earlier unknown documents and materials in scientific use .

The changes in Russia of the end 1980-th - beginning of 90-th have allowed the Museum to turn to the Museum's reserved collections and to show to public the subjects, documents and materials revealling pre-revolutionary history of the Russian Navy. The Museum has developed wide exhibition activity as in Russia and abroad. Peoples of the cities Nakhodka, Kaliningrad, Moscow, Archangelsk, Pskov, Yalta, Tyumen, Vyborg, Severodvinsk have got acquainted with its collections. Museum's assembly have received a high estimation in Denmark, France, Germany, Great Britain, Holland, Hungary, Italy, Japan, Spain, USA. The scientific and creative connections with museums of Russia and foreign countries have extended. The increasing of CNM's popularity and scientific authority has stirred up the first wave emigrants and their descendants. We were gifted the interesting materials from France, Holland, Japan, Tunis, USA. Citizens of Russian Federation do not leave us without attention too. Сollection of the Museum totals about 700'000 items today. 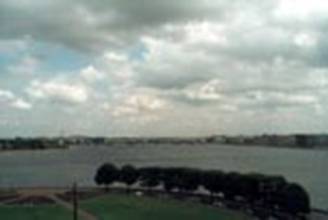 For last years authority of the Museum has considerably grown. It has become the member of the International Council of Museums (ICOM) International Association of Military Museums & Military History (IAMAM), International Congress of Maritime Museums (ICMM), Union of the creative museum workers of St. Petersburg and region.

Large popularity and authority the CNM is obliged for those museum's patriots who works in it for many years. The proud of the Museum are: L. I. Bereznitskaya, A. K. Belik, K. P. Krasnopol'skiy, A. L. Larionov, V. B. Morozova, L. S. Petrova, L. G. Shuster, I. P. Sukhanov, T. N. Topornina, A. A Tron'.

Recently the Museum has celebrated its 290th anniversary. Its scientific employees have the large creative plans. Highly professional collective, its knowledge and purposefulness is the pledge, that the Museum will keep traditions of the oldest scientific-educational institution and perfectly will be the pride of Russian Navy and the treasury of maritime glory of Russia. 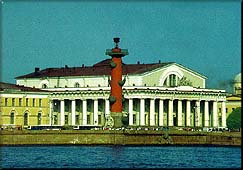 The Museum of Tbilisi's History, a treasury of material and spiritual values of Georgian people was founded in 1910. That time it was named "Municipal Museum", because it was established by the Municipality.

During 90 years more than 50 thousand items have been collected. This collection was enabling the Museum to expose the complete hi story of the town. The life and culture beginning from the IV millennium B.C., since the first inhabitants were settled here. This enabled the museum to present the incessant course of urban development through its important stages. Up to the XIX century Tbilisi was a typical oriental town with its Caravanserais and bazaars, houses with verandahs and balconies, with narrow lanes. The contact with Russian and European cultures gave European imprint to the life fashion of Tbilisi and to its external appearance. In the XIX century in the old part of the town, in the vicinity of Sioni Cathedral, where there were remnants of a Caravanserai built by the King Rostom in XVII century, a new Caravanserai was built. In 1912 the facade of the building was decorated. After restoration of 1980 this historical building became the residence for The Museum of Tbilisi's History.

Unique archaeological, ethnographical, documentary material, many masterpieces of folk and applied arts (carpets, kilims, etc.) are kept here. The Museum holds the richest photograph-collection which perfectly shows the views of the town, its life and its inhabitants. The Museum keeps many paintings, printings and graphical works of Georgian and foreign artists, depicting Tbilisi and its citizens in their rather colorful spectra. Alongside with the material depicting the past, The Museum of Tbilisi's History represents modern art too.

The modern Art department was founded in 1986 and is on the third floor of the building. The modern Art department of Tbilisi history museum exhibits the state of modern Georgian Art. Back in the former soviet time rather bold, nowadays Historical exhibitions were arranged, namely Georgian Neoexpressionism, Transavangard, Free Figuration, Installation, Video-Art, Performance and other trends and directions.

The Museum of the Armenian Genocide opened in 1995 in time to commemorate the eightieth anniversary of the Genocide. The Museum structure is of unique and original design. (architects: S. Kalashian and L. Mkrtchian). This two-story building is located at and in the side of a hill so as not to detract from the imposing presence of the Genocide Monument nearby. The roof of the building is flat and covered by concrete tiles. It serves as a scenic view point overlooking the Ararat valley and Mount Ararat.

The first floor of the Museum is below grade and houses administrative, engineering and technical maintenance offices and spaces, a 170-seat hall (Komitas Hall), storage rooms for museum and scientific objects, a library and a reading hall. The Museum exhibit is mounted in the second floor in a space which is over 1000 square meters. It occupies three indoor halls and one outdoor hall and its hallway. An eight meters long and three meters wide basalt stone lies on the floor of the outdoor hall and the hallway. The outdoor hall symbolizes the eternal memory of the victims of the 1915 Genocide and the unity of the Armenian people spread throughout the world. It also expresses the struggle between good and evil, light and darkness.

The western wall of the Museum's first exhibit hall has a map engraved in stone which shows the historical Armenian Plateau and neighboring countries. It is bounded by the Black Sea in the north, the Caspian Sea in the east, the Iranian Plateau in the south, and the Mediterranean Sea to the southwest. The map shows the Armenian settlements on the territory of Western Armenia and Ottoman Turkey which existed until the massacres of the Armenians and the massive death marches which began in 1915. The map is nine meters wide and five meters high.

The Introductory Hall exhibits photographs and ethnographic tables with information about the Armenian settlements and Armenian population figures in 1914 in Ottoman Turkey. They also contain information on the number of Armenian churches and schools which were functioning in the region at that time. A composite of the tables there and in the third hall provide a visitor with the following data, including the population figures in 1914 before the Genocide (See the following charts).

Name of Armenian Region and settlement (1914)

The second exhibit hall (700 square meters) presents eyewitness reports and documents about the massacres and atrocities perpetrated against the Armenians. The exhibit has many large photographs taken during 1915-1917, archival documents, portraits of prominent Armenians, victims of the atrocities, friends of the Armenian people, and documentary films.

A special part of the exhibit is reserved for the original documents issued by international organizations and parliaments of foreign countries condemning the Genocide.

Numerous different publications about the Armenian genocide written in many languages are also exhibited.

This hall also shows tables with data on the number of Armenians living in different countries of Europe, Asia, Africa, America and Australia after the Genocide. In the same hall a granite pedestal supports crystal vases which hold earth from historic Armenian regions: Erzerum, Van, Baghesh (Bitlis), Sebastia (Sivas), Kharpert, and Tigranakert (Diarbekir). It also holds the skull and bones of a young Armenian killed in the Der Zor desert. In the same hall, a granite tree with spreading branches symbolizes the eternity and rebirth of the Armenian people.

The tables displayed in the third hall show the Armenian population figures in 1914 and 1922 (See chart below).

Name of the Region

The last hall of the